The Independent Women's Forum is a nonprofit, founded in 1992, that supports limited government and free markets.

Ryan Alexander, the campaign manager for Balanced Education for Everyone, said many schools around the country are offering the Al Gore movie as an education on the global climate.
Source Link: michigancapitolconfidential.com
THIS ARTICLE CONTINUES

2010 has arrived and our New Year's resolution is to remain committed to bringing forward the truth about Global Warming hysteria.

During the new year this message must take root and we can accomplish this by having Not Evil Just Wrong shown in every school in America.  Last week, a Rhinebeck High School sophomore named Michelle Drewkett stood up to her school board about the biased teaching of climate change.  It is a story we hope to see repeated many, many times in 2010.

We are in an ideal position to make this coming year a success thanks to your support in 2009.  Over 400,000 of you participated in our premiere on October 18th and have continued to support our message discrediting environmental alarmism. 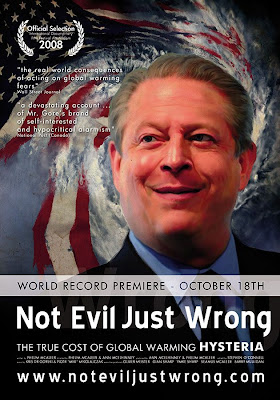 A POLITICAL row has broken out over a Derby Conservative councillor's decision to show a climate change-sceptic film in the city's council chamber.

The new film, Not Evil Just Wrong, is a documentary which suggests evidence of global warming is inconclusive and that the impact climate change laws will have on industry is much more harmful to humans than beneficial. It is a direct challenge to Al Gore's film, An Inconvenient Truth, with was shown to councillors in Derby during Labour's control of the authority in 2007.

Labour group leader Chris Williamson said: "I am totally appalled. The council is committed to reducing carbon emissions, yet the Conservatives are pushing a film which threatens all of that.

"It reaffirms our belief that the Conservatives have merely been paying lip service to environmental issues in pushing their new branding as a caring party."

Solar Cycle 25 Feed
Arctic Snap Feed
Current Poll
» How much "Man Made" CO2 Is In The Earth's Atmosphere?


you have already voted

Articles by Climate Realists and Topics